A decade-long bull market in global equities has been stoked by loose monetary policy and massive liquidity injections. 2018 saw these policies come to a dramatic holt and the ramifications were felt throughout financial markets globally. The US base rate was raised 4 times through 2018, by a total of 100bps to 2.5%. Combine this with liquidity withdrawal as the US Federal Reserve introduced Quantitative Tightening (QT) to reduce its balance sheet by US$400bn to still a significant US$4.1tr in assets. Only a matter of months ago US rate expectations were for four more hikes. The Fed has become more Dovish now predicting two in their latest comments, while markets are predicting that it may only be one more rate hike in 2019. The changes in expectations are closely aligned to a slower growth environment that is becoming evident in the US. High rates and liquidity withdrawal have put the brakes on auto sales and housing, as funding becomes more expensive and capital more scarce. US corporate earnings are also experiencing mixed results, as higher costs through wages and raw materials have crimped margins across a number of sectors, whilst we do not envisage a recession in the US, we see growth slowdown impacting equity markets. 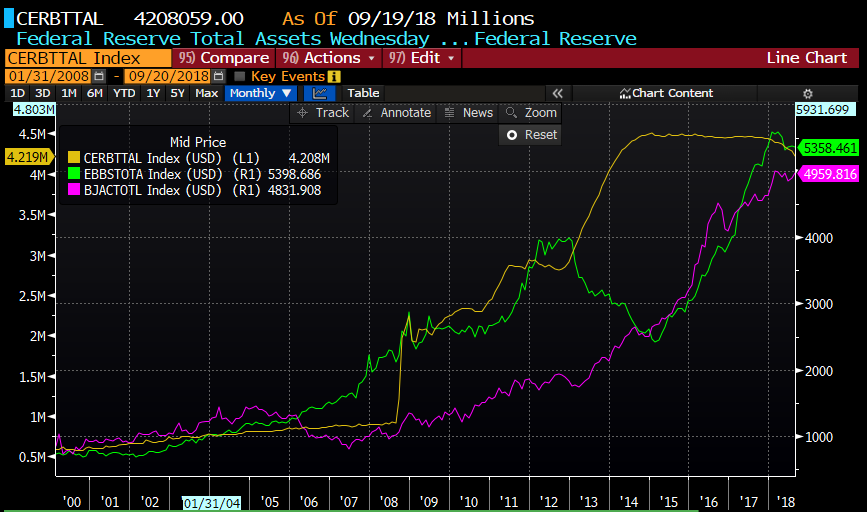 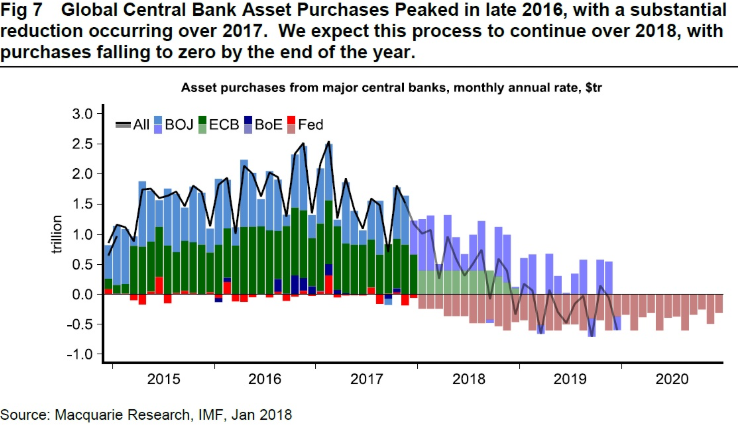 The crimping of the US economy is highlighted by a declining CPI inflation rate that in July stood at 2.9% and had fallen rapidly to 2.2% by the end of November. Lower inflation is a direct result of the abovementioned liquidity tightening that has seen a US economy slowing all year. The underlying slowdown in the US economy has been disguised by fiscal stimulus that President Trump has thrown at the economy, including substantial tax cuts, which in our view, has lead to the Federal Reserve tightening policy too far without fully understanding the extent of the slowdown.

The combination of rising rates from historically low levels and QT simultaneously is something that has never been done before and the consequences are still widely unknown. 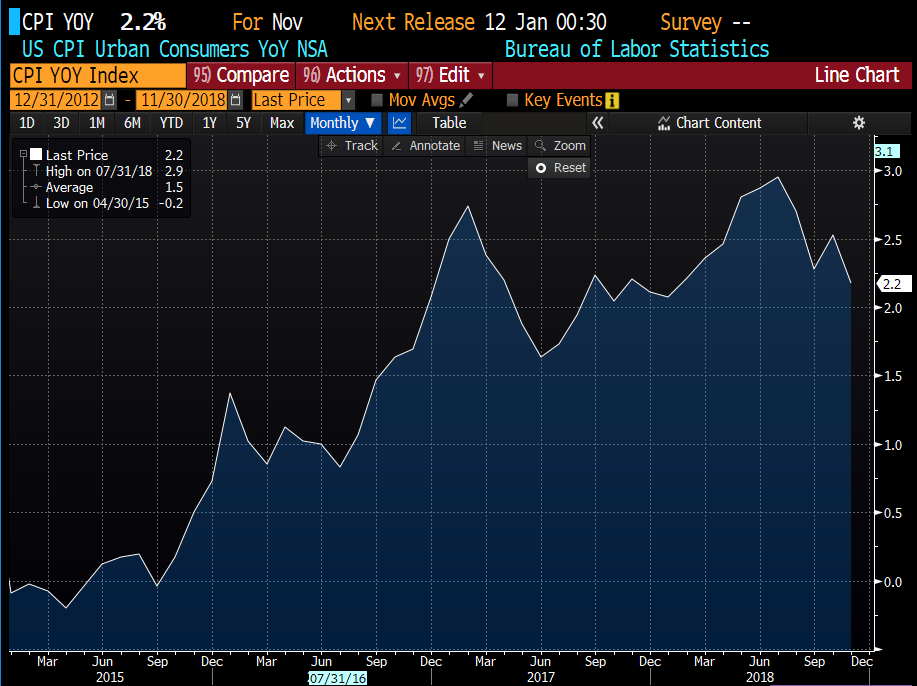 In Europe the economic indicators are even worse. The EU, a grand concept that takes the meaning of the word “bureaucracy” to a new level has seen political impasse and debt spiral out of control. Italy sits on a knife edge, with unemployment over 10%, GDP growth less than 1% and a significant budget deficit hampering structural reform and breaching EU rules. Germany, the titan of European growth is experiencing a substantial slowdown shown by its IFO Business Confidence Index coupled with exports contracting. Let us not forget the “Magic Pudding” as Theresa May leads the UK in Brexit negotiations – the gift that just keeps on giving! The UK consumer has slowed significantly as evident from recent company reporting including on-line retailer ASOS.

The Trump “Trade War” is expected to continue into 2019. China initially won the opening skirmishes in 2018 as its currency, the Renminbi fell nearly 10% offsetting Trump’s tariffs. That said, the US has been getting the upper hand in more recent salvos, with the treat of higher tariff rates, the arrest of Meng Wanzhou, the daughter and CFO of giant Chinese telecom components maker Huawei. China’s replies have become more ineffectual, with the recent arrests of Canadian business men in China deemed toothless and highlighting the fact that Xi Jinping is concerned and doesn’t want to inflame the US / China relationship further. Behind the scene’s, negotiations continue with topics including Intellectual Property rights and marine freedom of navigation also on the table. The continuation of the trade war has hurt global trade, impacting Chinese growth and other export led economies such as Germany. FedEx recent profit warning highlighted these risks. Chinese Industrial Production has slowed to 5.4% from 7% at the beginning of the year.

Australia is facing a number of problems that have accumulated from a twenty-seven year economic expansion. Households are struggling with their budgets as the impact of higher power prices, rising health costs, higher education costs, falling property prices and stagnant wage growth, combined to subdue consumer confidence.

The Banking Royal Commission has seen the major banks restrict the supply of credit, impacting what is the greatest store of wealth for Australians - housing. The credit-crunch may place the Australian economy close to recession in 2019, which does not bode well for equities. The Australian Federal election likely scheduled for May 2019 and a number of foreshadowed capital/investor unfriendly policies proposed by the Labor Party, will also prompt investor, business and consumer caution over the next 5 months.

Australia is also exposed to an economic deceleration of the Chinese economy. China is Australia’s largest export client and may also be at risk from the consequences of a US-China trade deal, to the extent that China must buy more US exports that could partially be funded from Australia.

Political and regulatory impediments are compounding the Australian slowdown. The Liberal party that is unable to implement policies due to a hostile Senate, while the Labor party, who look likely to form government in 2019 have a policy agenda (changes to negative gearing, imputation credits and industrial relations) that may further impede growth.

After the International fund’s mostly unhedged position benefited from a falling AUD through much of 2018, the fund moved to lock in the gains and placed a 40% hedge on the AUD at 72c in August. After holding this position and considering further economic news, the fund returned to a fully unhedged position in December noting in particular a worsening Australian economic environment and the recent 25bps rise in the US base rate.

We expect the US to maintain a 1.0-1.5% margin over Australia’s short term interest rates in 2019 which will keep the Australian dollar under pressure. This interest rate differential, combined with a worsening outlook for the Australian economy as house prices fall amidst a credit-crunch, justify the unhedged position. 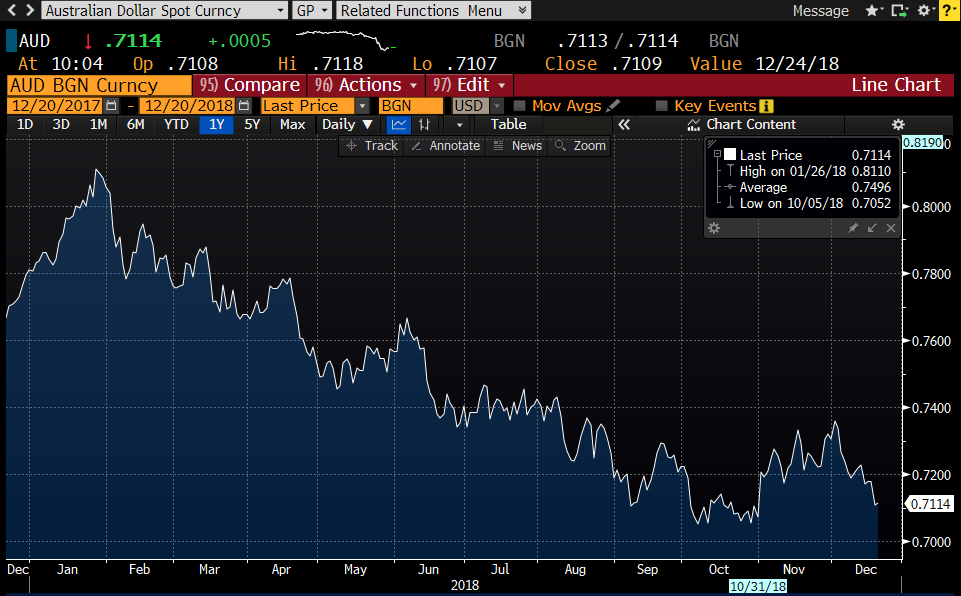 Our current base case entering 2019 is one of caution. 2019 looks as if it will throw up numerous challenges for equity markets. The change in rhetoric from the US Federal Reserve and the recent fall in US 10-year yields below 2.8% point to lower growth expectations for the US economy, supporting our position that the Fed would have to step away from its overly hawkish stance. Cost inflation is also eating into corporate margins that have been evident through US and European earnings seasons of late. We are cautious on the global consumer and currently the International Fund’s positioning stands “net short” Consumer Cyclicals.

The cost of rolling corporate debt is becoming more onerous with the BBB spread over treasuries hovering around 1.75%, up from 1.3% at the beginning of 2018, further highlighting credit implications for highly indebted corporates. The risk spreads on European high-yield debt are even more substantial. Moves in the credit markets have historically been a precursor to recession and although they can provide false indications, it is another data point that raises concern. 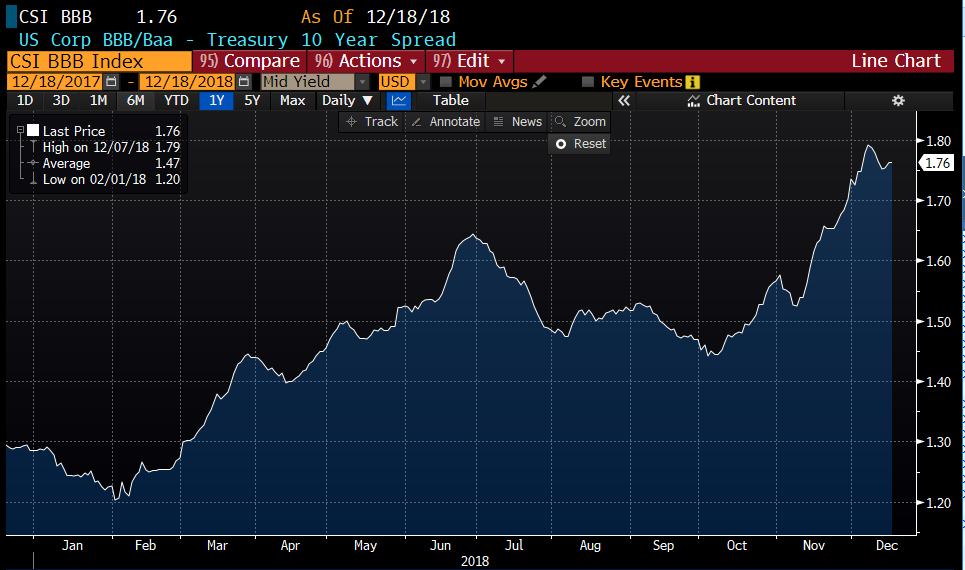 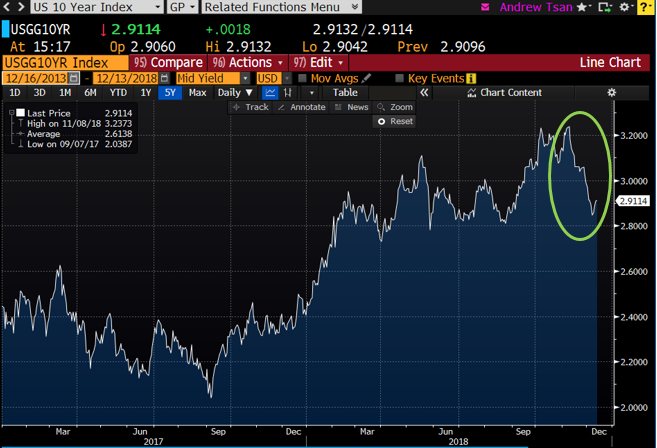 With our heightened concerns on current market conditions, the current Net Equity Exposure of the K2 Funds sits at very defensive levels. The current positioning reinforces our negative stance entering 2019.

The upside risk to markets and hence our portfolio positioning stems from the Federal Reserve stepping away from any rate increases in 2019 as the realisation of slower global growth dawns on the committee. This may than allow expansionary monetary policy to re-enter the economic sphere, a positive for equity markets. A conclusion of the US – Sino trade war would further allow a co-ordinated global stimulus response to slower growth. K2 continues to watch the rhetoric from the Federal Reserve and has noted their slow but meaningful retreat from an agenda of significant rate rises in 2019. A continuation of this policy shift will be positive for equities and valuations and through the year have the ability to dampen the impact of weaker corporate earnings growth. 2019 is set up to be a land of shifting sands and although we enter the year with a cautious portfolio positioning; we envisage a year of rapid change as economic and government policy dictates markets.

For any questions, please contact a member of the K2 Distribution Team.

K2 aims to provide its clients with a superior risk-adjusted return, while seeking to protect capital over the investment cycle. The K2 funds have a mandate to invest both long and short in equity markets, with the added flexibility of holding up to 100% cash

DISCLAIMER: The information contained in this article is produced by K2 Asset Management Ltd (“K2”) AFSL: 244393 in good faith and is intended as general information only and is not complete or definitive. K2 does not accept any responsibility, and disclaims any liability whatsoever for loss caused to any party by reliance on the information in this article. Any advice in this article is general in nature and does not consider your individual objectives, needs or financial situation. You should consider your individual circumstances before making a decision about any of the financial products discussed in this article. K2 is the issuer of a number of managed investment schemes. A product disclosure statement for the managed investment schemes referred to in this article can be obtained at http://www.k2am.com.au or by contacting K2. You should consider the product disclosure statement before making a decision to acquire or continue to hold an interest in the managed investment schemes.

BACK TO NEWS & MEDIA